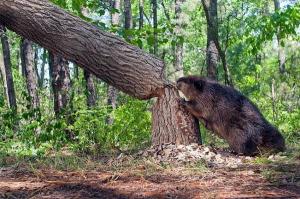 According to specialists, along with pollution and climate change, invasive species are one of the most damaging challenges for our planet.

Until a few decades ago, there were no beavers in Patagonia. That changed when 20 pairs of the tree-chewing creature were introduced with the hopes of creating a fur industry.

Introduced in 1946, they have reached all the most important islands south of the Strait of Magellan and now are invading the Brünswick Peninsula, on the South American continent, occupying a total area of approximately 70,000 km2.

Today, their numbers have exploded and they pose a serious threat to the South American area’s biodiversity. Within a few years of their export to the southern tip of Patagonia, the animals had expanded their range around the region.

In North America and Europe, beavers live in balance with their natural habitat. But in Patagonia, the native trees don’t regenerate fast enough to keep pace with the animals’ rampant destructive powers. Plus beavers in Patagonia don’t have any natural predators, like bears or wolves.

With the trees they fell, beavers build dams up to three meters tall. These structures can change waterways and lead to flooding or drying of traditional river ways.

Within a few years of their export to the southern tip of Patagonia, the animals had expanded their range around the region.

The Patagonian forests have proved particularly vulnerable to beavers. Unlike North American trees such as aspen, birch and willow, none of the region’s endemic tree species grows back once gnawed or flooded. 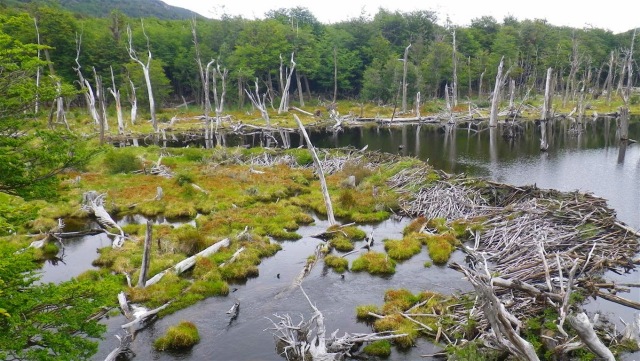 Once the masticating critters move on, they leave deadwood, bogs and meadows filled with invasive flora. Beavers, Anderson says, are responsible for the biggest transformation of southern Patagonian forests since the last ice age. They have reengineered the ecosystem even more than humans have.

The efforts have been subjected to scientific study. Currently, the emphasis in the Tierra del Fuego National Park is on control, not on eradication.

Their advance has been so swift that today they represent a menace that is proving hard to control. Authorities in Argentina and Chile have authorised the hunting of the animals, but these efforts have not stopped the beaver.

Chile and Argentina are now determined to completely eradicate the tree-chewers, said Adrian Schiavini, a beaver specialist from a regional research centre.

In the Huilo Huilo reserve in southern Chile, dozens of invasive-species experts got together recently for the country’s first national meeting focused on invasive species in protected areas, to try to address the lack of knowledge and rules to tackle the problem.

Some park rangers use steel traps that snap down on the animal’s head and instantly kill it. Private individuals receive rewards for trapping beavers, although success has been elusive.

But, there is still a a challenge. If eradication works, Argentina and Chile will have to figure out how to restore the forests that have already been damaged. Researchers are investigating whether carbon-offset dollars could be used to fund reforestation.We hope obtain the resources needed to reforest the Patagonia.

Environmental, Ecologists and Conservationist news from the Americas
View all posts by ANCA24canada →
This entry was posted in Notes. Bookmark the permalink.